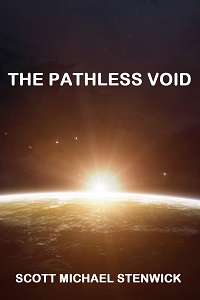 My science fiction novella The Pathless Void is my second self-published book. It started out as an unofficial NaNoWriMo project several years ago, and while I did hit the 50,000 word mark, I decided that the last 10,000 or so were not all that good. So I reworked the good parts as a novella that’s about half a novel, and going forward my plan is to serialize the story with at least one more of equal length. This first installment deals with the salvage of an alien spacecraft, and the second will introduce the aliens themselves.

When twenty-second century physicist Evan Walker designed the first functional warp drive, he had no intention of ever leaving Earth. But an astounding discovery leads to a mission in interstellar space that requires his personal attention, and he must overcome his fear of space travel if he hopes to succeed. He and his colleague Heather Richmond work to salvage an alien spacecraft discovered in the Alpha Centauri system that could hold the key to humanity’s future. Will they arrive home safely, or will they be marooned in the pathless void between worlds?

Read a sample from The Pathless Void here.

This is a very cool tech-heavy sci-fi story. The only problem is that it’s too short! I can’t wait for the next installment!

If you’re a fan of classical “Golden Age” science fiction that’s heavy on the speculative science, or tales of interstellar travel and alien civilizations, you’ll love The Pathless Void.

The Pathless Void is available in paperback and ebook editions from multiple outlets.

Pick up your copy today to leap into the future!