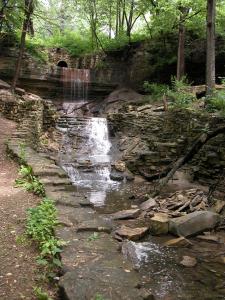 In this chapter Balzador attempts to use Liber Iadnamad to bind the magical energy of the universe to him. He is interrupted by Aleric Sprengel, the Guildmaster, and the two do battle near the base of the falls. Aleric is defeated, but Balzador is forced to flee without completing his ritual.

This photograph shows nearly the exact place where I imagined this confrontation taking place. The stone stairs mentioned in the chapter are just to the left of the creek and falls and are out of frame. The trail that can be seen on the left side of the image leads right up to them.