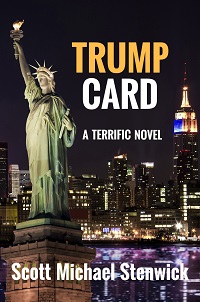 This sample of “Trump Card” was my reading selection at the Barbaric Yawp, held at the Underground Music Cafe in Falcon Heights, Minnesota on July 30th, 2017.

Heavy footsteps behind me pulled me out of my reverie. They were followed by a loud voice. “Sophia Sanders!”

Against my better judgment, I turned around. A man stood there, his build big and tall, with a sharp, angry crew cut to match his sharp, angry eyes.

“Yeah! You’re that bitch from Teen Vogue. I knew it!” He was dressed in a tan suit coat and slacks that looked a little too large for his frame. Underneath he wore a plain white dress shirt. Noting his Pepe the Frog lapel pin, I realized that I was probably in trouble. White supremacists loved Pepe the Frog, and with them I knew that showing fear was not an option.

“Can I help you?” I asked as calmly as I could.

“That article you wrote about President Trump was disgraceful. Insulting! How dare you?”

I resisted the urge to ask him which article. “I’m a columnist. I write opinion pieces. If you disagree with my politics, that’s fine. Don’t read them.”

“Yeah, insulting!” he repeated. “Dishonest, too. The president’s not a Whig. That’s his real hair!”

My jaw fell. I was dumbstruck. Could this guy really be that stupid? “I didn’t say that he wore a wig,” I countered. “I said he was a WHIG. W-H-I-G. The Whigs were a political party from before the Civil War. They were conservatives who supported protectionism. You know, ‘border taxes,’ just like the ones the president supports. That was my point. It has nothing to do with his hair.”

The man shook his head and rolled his eyes. “Whatever, bitch,” he spat. “You’re gonna apologize to the president right here and now, or I’m gonna give you something to apologize about!”

I cocked my head and stared, trying to parse his statement several times. “That doesn’t even make sense,” I said finally. As soon as the words were out of my mouth, I realized that they were probably the wrong thing to say.

“Maybe this will!” he hissed, grabbing my arm hard enough to bruise and shoving me off the path.

Part of me couldn’t believe this was happening. Another part of me knew the only way out was to fight. But I had no idea how. As the man drew his hand back to punch me, I felt a tingling sensation in my chest where the pendant touched my skin. I made the tightest fist I could, and flailed wildly at his face.

At least, I thought I was flailing wildly. As my arm shot forward, I felt the tingling extend from my chest into my shoulder and all the way down to my hand. As my fist connected with the man’s face, he was thrown backwards and off his feet. He fell and slid all the way into the brush on the far side of the path. It felt like something out of a movie.

I knew that I wasn’t strong and wasn’t fast. I had never studied martial arts. But as the man staggered to his feet he looked as if he had been hit by a truck. He glared at me with a dazed expression, clutching his bleeding and broken nose. He weighed his options for a moment, and then decided to turn tail. “Ninja bitch!” he cried, running away as fast as his feet would carry him.

I looked at my hand. I was surprised that landing the punch had not hurt one bit. I half expected broken knuckles, but they were barely bruised. My arm ached where the man had grabbed me, and I could tell that would be sore for a while. Not my hand, though. It felt mysteriously undamaged.

Click here to order your copy of Trump Card today!