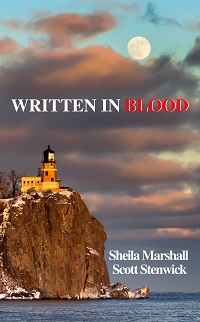 This sample of “Written In Blood” was my reading selection at the Barbaric Yawp, held at the Underground Music Cafe in Falcon Heights, Minnesota on February 25th, 2018.

Shawn Davis strode into the room, cape flapping in the air behind him. The small, cramped study room at the Chicago Austin Library in Oak Park had barely enough space for its contents – one industrial table surrounded by six chairs. “I’m finally here,” he announced to the other three attendees with his usual dramatic flair. His expansive cape made the room seem even smaller than it already was.

Shawn looked and behaved like an actor. His dark hair was always perfectly styled, and his movements suggested performing on the stage. In the years since he had dated Kristie his affectations had deepened, giving him the air of a refugee from a second-rate Renaissance fair. But the most disturbing thing about him was that he seemed to have started to believe his own press.

“We’re all here. What gives, Shawn?” demanded Claire Clemmons, leaning back in her chair on the other side of the table. “I had to change my schedule at the hospital to make it to this meeting of yours. It had better be as important as you said it was.” She ran a hand absent-mindedly through her short blond hair as she straightened her nurse’s uniform.

“Oh, it is,” he replied, his gaze sparkling behind his heavy eyeliner. With another flourish, he pulled a newspaper from his messenger bag and slapped it down on the table with the headline for all to see.

The room was silent. “So?” questioned Claire, after what felt like a long time.

“Just hold on a minute,” said Bradley Bishop, the president of the Vampire Studies Association. “We can’t jump to any conclusions.” Dressed in a casual flannel shirt and jeans, Bradley looked nothing like a vampire hunter of yore. He did look like a hunter, with his short brown hair and thick beard, but it was there that the resemblance ended.

“We can’t jump to any conclusions without an investigation,” corrected Shawn. “Obviously, if we’re going to catch the monster, we need to organize an expedition.”

“Up to Two Harbors?” asked Terry Nolan. “That’s way up in the middle of nowhere.” Terry was the most formally dressed of the bunch, wearing a suit and skirt set that was less expensive than it looked. Her long dark brown hair was tied in a ponytail that reached almost to the small of her back. “The odds are it’s some crazy mountain man on a killing spree.”

“Seriously, Terry?” said Claire in an exasperated tone. “They don’t have ‘mountain men’ in northern Minnesota. They have those people who say stuff like ‘you betcha.’ It’s like in that Fargo movie.”

“Even though Fargo is in North Dakota,” noted Bradley.

“That’s the point!” declared Shawn. “What better place for a foul creature of the night to hide than in a place the rest of the world has forgotten?”

“But you want us to go there?” asked Claire.

Shawn sounded insulted at the very question. “Of course. We’ll organize our expedition, travel forth to meet the beast on its home turf, and strike it down. We’re the Vampire Studies Association, after all.”

“Normally the word I emphasize is ‘Studies,’” said Bradley. “We’re not equipped to confront a murderer. That’s a job for the police.”

“Ah, but what police force could stand against the undead?” shot back Shawn.

“You’re saying the cops can’t do it, but somehow you can?”

Shawn sighed. “Do I have to go over this again? Really? I’ve spent the last three years immersed in the authentic study of the occult, not just the stage trickery that I reserve for children’s parties. I am a true sorcerer now, as capable as anyone out there of dispatching a creature of the night animated by dark forces.”

“Is that the deal with the eyeliner?” asked Claire weakly.

Shawn puffed himself up. “The spirits I command are drawn to those who dare to dress in an interesting or unusual manner. So in a way, this eyeliner magnifies my powers. Now are the rest of you coming or not?”

Terry shook her head. “I’m behind on patient intakes at New Horizons.”

Bradley shrugged. “I could go. But whether I want to start my hunting vacation early, let alone spend it traipsing around after this ‘vampire’ of yours, is a whole other question.”

“So this doesn’t intrigue you at all?” Shawn’s face fell like that of a small child denied a puppy. “Come on! What if it’s a real vampire? We’ve never come across one, ever.”

“What if it isn’t?” asked Bradley. “I’ll say it again. We’re not law enforcement officers. If this is a serial killer who doesn’t happen to be a vampire, we’ll find ourselves over our heads in no time.”

“Hunting weapons, yes,” Bradley said with a nod. “That’s why I would go in the first place. It’s October now so hunting season starts in a couple weeks, and I’ve never hunted in northern Minnesota. I was trying to make up my mind between the North Shore and the woods east of Superior, Wisconsin. But there’s no way I’m going to try taking down a murderer with a hunting rifle.”

“There’s an art show,” Shawn said at last, and somewhat begrudgingly. That got Claire and Terry’s attention.

“What kind of art show?” said Terry, perking up.

“It’s called the Crossing Borders Arts Festival,” explained Shawn. “There’s going to be a whole bunch of local artwork, Native American art, pieces from Canadian artists – hence the whole ‘crossing borders’ thing – and all kinds of unique pieces that you would never be able to find here in Chicago. I know you both collect that stuff. It’s happening in Two Harbors, and it starts in a couple of days.”

“I suppose I could use some of my vacation time,” said Claire thoughtfully. “I’ve always wanted to pick up a couple of nice pieces from the North Shore for my collection.”

“We could check in on Kristie,” Terry added.

“You know,” answered Terry. “Kristie Slay. You two dated years ago. She recently resigned from New Horizons and moved up to Two Harbors. Hadn’t you heard?”
“We don’t keep in touch,” said Shawn, a dark note slipping into his voice. “So if we check out the art show, meet up with Kristie, and allow some time for non-vampire-related hunting, will you all come?”

“Sure,” answered Claire with a wide smile. “Why didn’t you lead with that?”

“Because it’s a vampire!” Shawn threw up his hands. “A real freaking vampire. We’re the Vampire Studies Association. Aren’t any of you the least bit excited?”

“By this vampire, or by this notion that you can protect us from it with your magical powers?” asked Bradley. “Don’t get me wrong, I find the occult just as interesting as you seem to, but what are you going to do? Throw some balloon animals at it? Maybe some balloon animals filled with holy water?”

“No,” Shawn said sharply, “I’m going to bind it outdoors using a spell that summons a spiritual barrier no vampire can cross. Then all we have to do is wait for daylight. When the morning sun hits the vampire, it will explode. Or burn. Or something. Anyway, the monster will die.”

Written In Blood is coming soon from Moonfire Publishing. Click here to find out more!