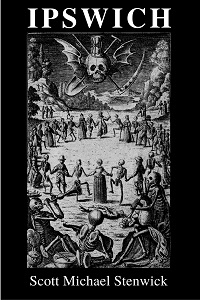 This sample of “Ipswich” was my reading selection at the Barbaric Yawp, held at the Underground Music Cafe in Falcon Heights, Minnesota on August 27th, 2017.

They walked up the front steps to the main entrance and wandered down a long, poorly-lit corridor that led to the rear of the building. Sara could not identify any particular aspect of the place that was obviously broken or run-down, but a general dinginess pervaded the whole atmosphere. The flooring and wallpaper were cheap and generic, the electric lighting was inadequate, and there were no windows to allow natural light into the space. She could tell that this housing complex served mostly the poor and downtrodden. But what she felt went beyond the physical. To her magical senses, the building seemed to have absorbed the residents’ fear and desperation. It tinted the building’s aura a sickly shade of dark bluish green.

The door to Wells’ apartment was at the end of the hall and around a corner, marked with the bright yellow police tape. Tom unlocked the door and stepped inside, gesturing for Sara to follow. She stepped through carefully, watching her foot to make sure it did not disturb the tape. As she looked around the small living room, she was reminded of the old saying about serial killers – they look like everyone else.

Like Wells’ outward demeanor, the room was in no way remarkable. A large television sat opposite a worn couch, with a coffee table between them and a reclining chair off to the side. She noticed that the television was big. It was an older tube-based model rather than a plasma or LCD. She did not see any books at all, which struck her as odd if Samantha was right about the man having magical training. As far as she knew, most magicians learned by reading up on rituals and practices. The only bookshelf in the room stood next to the television and held DVD’s and a few commercial videotapes, mostly popular action movies.

“Anything?” asked Tom as she paused for a moment to survey the room with her magical senses.

“How about the kitchen?”

She crossed the room to the kitchenette, more a counter with a sink and appliances than a room in its own right. Starting at one end she opened each of the cabinets in turn, scanning them for anything out of the ordinary, but founding nothing. “Nope,” she replied with a shake of her head.

“The bathroom and bedroom are over there,” he said, indicating the narrow archway to the right of the living room. “But just like the rest of the place, forensics has gone over everything. Maybe this is a waste of time after all.”

“So they found nothing?”

He shook his head. “The only evidence of a crime that we found was a pipe and a small bag of crystal meth in the bedroom.”

“Well, that’s the only strange thing about this case that we’ve found so far. He had no drugs at all in his system when we brought him in, and he’s not showing any withdrawal symptoms. Meth-heads use as long as they have some, and then crash when they run out. It’s pretty unusual to arrest somebody who has it in their drawer but not in their system.”

“No, the bag we found was way too small and the pipe had been used, just not recently. And there were maybe twenty bucks in cash in the whole place. Maybe he was on it and just got clean. But, if he did, why would he hold onto the drugs? It’s not like this is a neighborhood where a bag like that would be hard to sell.”

Sara stepped through the archway and found a door to her right and another to her left. The door to her left led to a tiny bathroom, with a short tub and shower surround. The tub was so small it really only worked as a shower. Still, it could technically be called a full bath, and she was sure the landlord took full advantage of that when listing the place. The rest of the room was taken up by a toilet and a pedestal sink — the only real storage space was the medicine cabinet on the wall. She opened the cabinet, but found nothing out of place.

“Nope. I guess we’re down to the bedroom.” She opened the last door and stepped inside.

The bedroom was small and dark. Pulling the closed curtains to one side and looking out the window she realized that the room sat right against the rear wall of the building. The windows looked out onto a parking lot, so she was not surprised that the blinds were closed. She checked the small closet, the dresser, and the night table, noting that while the shelf below the night table did hold a few books, they were popular paperback novels rather than anything occult.

Only then did she notice the floor. “Tom?” she called. “I think I might have something.”

He stepped into the room “Where?”

“Forensics would have looked under the rug, right?”

“I’m not sure,” she replied slowly. “Roll it up and off this section here, if you would.”

He quickly donned gloves, picked up the edge of the cheap oriental-style rug, and rolled it back off the hardwood floorboards. “What?” he asked as he examined the bare floor.

“You can’t see that?” she said incredulously. “Really?”

He shook his head. “Where?”

“Right there.” Sara pointed with her index finger, and as Tom’s eyes followed it he found himself startled as the image before him shifted. Cut into the floor was a trap door. It was square, big enough to admit a large man, and could apparently be lifted by means of a heavy inset wrought-iron loop. But it had not been there a moment ago.

“How did you do that?” he demanded.

“It glows,” she explained. “The rest of the floor doesn’t. I could even see it through the rug. It’s like you only see it if you already know it’s there. It has to be some sort of spell. What do you think is down there?”

“Something our suspect wanted hidden. Maybe a secret compartment?” Tom grabbed the ring with both hands and pulled open the trap door, which resisted at first but finally gave way with a rush of fetid air. The space below was not a compartment, but rather a hole through the floor leading down to the basement level.

The odor was not strong, but it turned Sara’s stomach. “The smell…” she said weakly. “What is that?”

Tom looked at her gravely. “It’s something dead, Sara. It’s faint, but that smell’s not something you ever forget. We need to get forensics back out here right now.”

Click here to order your copy of Ipswich today!