As it turns out, I’ll have two new novels coming out this summer from Moonfire Publishing.

I already mentioned Ipswich, the long-awaited sequel to Arcana, in an earlier post, back when it was originally accepted for publication. It was tentatively scheduled for a spring release, but it’s looking like it will be summer now. We’ve been working on the editing and the manuscript is shaping up great. I’m very happy with it. I think you will be too.

If you liked Arcana you’ll love Ipswich. It’s a tighter, more accessible story that doesn’t skimp on the elements that made Arcana a unique novel. There’s magick, of course, along with necromancy, witchcraft, and spirits. 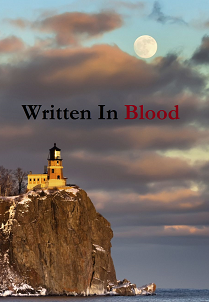 The second novel is a collaboration with Sheila Marshall, a paranormal vampire tale titled Written in Blood.

Written in Blood is set on the North Shore of Lake Superior, around Two Harbors and the evocatively named Castle Danger. In case you’re wondering, the latter is a real town. You can find it on a map and everything.

It tells the story of an ancient vampire with the power to write the fate of the Northland in his blood. He uses this power to write his ideal companion into existence, and summons her to Castle Danger. But she carries with her a secret that may lead to both their undoing.

Fans of vampire and paranormal fiction will love Written in Blood. It has mystery, romance, action, and of course plenty of bloodletting. Watch for it along with Ipswich this summer, and check out the Moonfire Publishing website for updates and announcements.

This entry was posted in Announcements, Books. Bookmark the permalink.