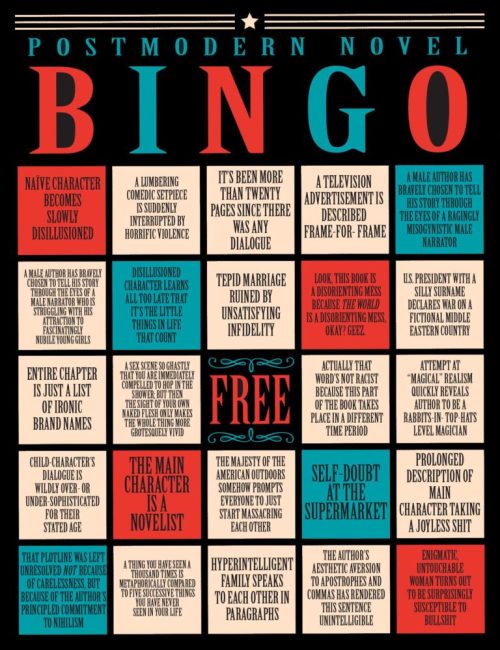 The “literary versus genre” debate rages on. This article from Current Affairs discusses the universal acclaim received by Nathan Hill’s 2016 debut novel The Nix. It’s a postmodern novel about… well, what are postmodern novels about, anyway? To me, that’s part of the problem, and that always makes them a hard sell in my world. I may never be a great prose stylist just because I seem to lack the “love of language” that characterizes the best of them, and that means I always have been much more interested in what an author is saying than in how he or she is saying it.

Critics from major publications were united in their praise. They agreed not merely that The Nix was good, but that it was breathtakingly good. Said The Independent: “Reading The Nix—all 620 pages of it—is an experience of complete unadulterated pleasure.” Said The New York Times: “Hill has so much talent to burn that he can pull off just about any style, imagine himself into any person and convincingly portray any place or time… the author seems incapable of writing a pedestrian sentence or spinning a boring story.” Said The Guardian: “Hill is an assiduous selector of words whose artistic concentration seldom lapses. He is also a very musical stylist—the book is full of long, beautifully counterweighted sentences and subtle cadences that change from voice to voice as different characters take up the narrative.” Booklist compared Nathan Hill to John Irving. John Irving compared Nathan Hill to Charles Dickens.

So what I can get out of that is according to critics, Hill is a very good writer. There’s not much at all in there telling you what the novel is actually about, so I suppose the point is that if you’re the sort of person who values prose styling over the actual story, this is the book for you. On the other hand, if you’re actually looking for a good story, the article points out that this might not be the book for you at all.

In the interests of sparing you the trouble of reading the whole thing yourself, I’ll summarize the plot briefly for you here. The Nix is the story of a sexually frustrated academic who despises his students. Most of the first part of the book is an extended flashback to the time in his childhood when his mother abandoned him. Cut to his mother. She has an extended flashback to the time in her college days when she was peripherally involved in some anti-Vietnam protesting. There is a longish interlude about a kinky affair between a police officer and the mother’s college roommate, who enjoys being choked. The mom and the son have some cursory present-day interactions for the purposes of linking the two storylines together. There is a shocking twist at the end where you find out that one minor character is actually a different minor character. The end.

Oh, wait, there was also another plotline where the academic is in love with a violinist but her soldier brother sends the academic a deathbed letter from Iraq telling him not to have sex with his sister, so he doesn’t. Also a malnourished recluse named Pwnage nearly dies of a blood clot after playing a video game for too long. This is described at considerable length and has more or less nothing to do with any other part of the plot. The end.

Wow, that sure sounds like a story I want to read – NOT. Seriously, though, I haven’t read this novel and I have no idea whether it’s really any good. A lot of critics loved it, and Brianna Rennix, the author of the linked article, hated it. From the description here what I can say is that no matter how well-written it is, it’s not something I’m ever likely to read. To me, the story sounds boring and pointless, and no amount of prose styling, no matter how skillful, can fix that.

So why has this dreary novel received so much adulatory attention from the critical establishment? Well, aside from the possibility of a highly concerted behind-the-scenes wining-and-dining campaign by Nathan Hill’s agent, my only explanation is that literary critics are trained to respond to certain cues that signal to the reader that a given book is A Serious Work Of Postmodern Literature. Over recent decades there has been a hiving-off of books into lowbrow “genre novels”—mysteries, thrillers, science fiction, romance, and the like—and “literary novels,” which are all self-consciously vying for an immortal place in the Great Books canon.

But just as mystery novels have their locked rooms and romance novels their kilted Scotsmen, the literary novel is a genre like any other, with predictable tropes and a predetermined range of narrative possibilities. Postmodern writing has a very strong focus on literary style: it prioritizes conveying a mood rather than telling a story, and writing a “striking” descriptive sentence over presenting a fully-realized three-dimensional character. The art of the short story, being easier to read and grade, is more highly-prized by MFA instructors, and consequently the novels produced by MFA-trained writers have a cobbled-together feel of multiple short stories mashed into something of a novel-length. So-called experimental elements, such as unusual text formatting, have long since ceased to be experimental: they are now well-established formulas.

Here Rennix absolutely nails it. When people go about how the genres I write in, science fiction and fantasy, are not “literary,” I just roll my eyes. While it’s true that much genre fiction is not well-written enough to qualify, the subject matter itself should not be disqualifying. After all, “dysfunctional family” is a genre too, and we all know how much “literary” writing employs the same old tropes of abusive parenting and the like.

Now I’m not trying to argue that I’m necessarily a good enough writer for my fantasy or science fiction to be considered literary, I just think the idea of dismissing entire classes of subject matter out of hand is profoundly misguided. If you think fantasy can’t be literary, read Susanna Clarke’s Jonathan Strange & Mr Norrell. Anybody who tells me that’s not a literary-quality novel is absolutely full of it. Prose in science fiction tends to be more sparse and minimalistic, but what about pieces with massive and intricate world-building, like Frank Herbert’s Dune?

My point is this – evaluating novels as “literary” or “not literary” should depend not on their genre, which might be “dysfunctional family” or “post-modern” or “science fiction” or “fantasy.” It should be based on their overall quality as novels, regardless of their subject matter. Personally, I read very little of the “literary” stuff under the current definition just because I’m not that interested in reading about regular life. I already have one of those.

And as I see it, magical powers and advanced technology are interesting. A bunch of characters who waste their time agonizing about a bunch of stupid crap, or whining about what assholes their parents were, are not. Likewise, all too often “experimental” is just another word for “garbage.” I know there are people out there who feel completely differently, which is good. I find it particularly sad when authors can’t find an audience. I’m just not going start reading this stuff myself any time soon.

Now is it just me, or does that “postmodern novel bingo” card up there look like a writing prompt? Maybe I can figure out a way to work every single one of those into a novel that is simultaneously postmodern, dysfunctional family, science fiction, and fantasy. That would show them!

This entry was posted in Books, Observations, Writing. Bookmark the permalink.