Mortals, Immortals, and an Internet Mystery 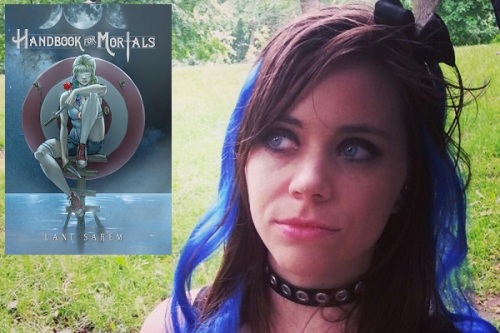 This month an enduring Internet mystery has finally been solved. For many years now, a piece of Harry Potter fanfiction called My Immortal has been circulating on the Internet. My Immortal is considered the worst piece of fanfiction ever, and many have wondered whether it was an intentional parody or just plain awful. Up until now, all attempts to track down the author had proved fruitless.

But Vox reports that as revealed in a new memoir Under the Same Stars, Rose Christo, the author of many serious young adult novels, was the author of this notorious tale. And yes, it turns out that My Immortal was an entirely intentional parody by a skilled writer trying to produce the worst possible thing that she could imagine.

Out of an endless sea of bad fanfiction typically found on FF.net in the mid-aughts — there’s a reason fans refer to the site as “the pit of voles” — My Immortal stood out because it contained every hallmark of terrible fanfic, but ratcheted up to 11: a main character who was a blatant Mary Sue, a hilariously defensive author who liked to alternately explain things and argue with readers in author notes, amusing misspellings, and, as the owner of the current My Immortal archive puts it, “extreme gothic attitude.” (“I ate some Count Chocula cereal with blood instead of milk.”)

When the story first appeared, many readers thought it was an intentional parody, but no one was quite certain. This essential question — was My Immortal trolling fanfiction or not? — would come to define the story’s cultural reception.

At 22,000 words, it offered what Harry Potter fans instantly recognized as the typical Mary Sue Goes to Hogwarts trope. Ebony, often spelled Enoby in the story, instantly wins friends and enemies thanks to her unapologetically goth — or “goff” in My Immortal speak — lifestyle and innate sex appeal. Clad in her signature black corset bra and Hot Topic fishnet leggings, she has romantic flings with all the wizard hotties. (The fic also features a past relationship between Draco Malfoy, who has sexy red eyes, and Harry, who’s a vampire.) She ultimately fights Voldemort using the power of sex appeal — with a constant background soundtrack of her favorite goff bands: Good Charlotte, My Chemical Romance, Linkin Park, and so on.

Having only heard of My Immortal in passing as the worst fanfiction ever, I finally read the opening excerpt in the Vox article – and to me, it looks like it has to be a parody. Just the main character’s name alone – “Ebony Dark’ness Dementia Raven Way” – is so over the top that I find it hard to believe anybody took it seriously. A bad fanfiction character might have one or two of those in their name, but five in a row? That had to be a joke.

Christo was outed by a scandal that came to light this last August. The scandal itself had nothing to do with her, but in the ensuing discussion the existence of Under the Same Stars was revealed. Christo would be outing herself as the author of My Immortal in her memoir anyway, but because of the scandal, her book’s contents were leaked ahead of its publication.

On August 27, 2017, the publishing industry’s online community began whispering about a book that had sprung out of nowhere to overtake the long-dominant No. 1 best-selling young-adult novel The Hate U Give at the top of the New York Times best-seller list. The Times is notoriously secretive about its methodology for calculating its list, so it’s possible for a book to come out of nowhere and debut at No. 1. The problem was that this particular book, a YA fantasy called Handbook for Mortals, was by an author no one had ever heard of. And while normally books are marketed for months leading up to their release, with advance copies circulated to generate buzz, no one had seen any previews for this one.

My Immortal and Handbook for Mortals have nothing to do with each other, but they converged online in an astonishing way. Speculation ensued that Handbook for Mortals and its mysterious author, Lani Sarem, had bought their way onto the Times best-seller list. (The book was ultimately pulled from the list.) In the middle of the intense scrutiny of Handbook for Mortals, Bookriot writer Preeti Chhibber offered up a wild guess: What if Lani Sarem was the author of My Immortal?

I covered the Handbook for Mortals scandal back in August, noting that if I had over three hundred thousand dollars available to promote one of my books, I probably could have come up with something better than calling up a bunch of bookstores, asking if they reported sales to the New York Times, and then if they did, ordering hundreds of copies at a time. The methodology was so transparent it amazed me that it took as long as it did for anyone to notice.

Basically, what was going on here is that there was some speculation, based on similarities in the writing, that Handbook for Mortals might have been written by the author of one of the worst pieces of fanfiction of all time. Ouch. No wonder they had to buy their way onto the New York Times bestseller list in order to scam investors on a movie deal. My novels may not sell that well, but nobody’s ever told me that they read like monumentally terrible fanfiction.

At the same time, an editorial assistant at Macmillan Publishers, attempting to interject amid the speculation over Handbook for Mortals, blurted out the news no one was expecting, in a pair of since-deleted tweets: that Sarem couldn’t be the author of My Immortal because the real author of My Immortal was publishing a memoir with Macmillan.

Christo, as it turns out, has already self-published numerous young adult novels. But her memoir, Under the Same Stars, forthcoming from the Macmillan imprint Wednesday Books, is all about her secret identity and her most famous creation.

So, in fact, the mystery of My Immortal is now solved. It was an intentional parody by an author with some actual writing talent deliberately trying to write something terrible. For those folks who made fun of the story on the grounds that it was serious and the author was really that terrible, this has to be a pretty big letdown. Also – this means that there are enough similarities in Handbook for Mortals to suggest the serious author of that book writes like a parody by another author trying to write the most awful thing she could come up with. Double ouch.

Stephen King complained in On Writing that he finds it pretty annoying that so many people tell him that The Stand is the best thing he’s ever written, because he wrote it back in the late 1970’s and had written a lot more books by the time On Writing came out in 1999. One of the odd things about writing is that with your early books, you use your best ideas but your writing has yet to mature. As you write more and more, your ideas tend to get repetitive. So there’s a sort of “sweet spot” where your writing has gotten good enough and your ideas are still fresh. That might explain why The Stand turned out the way it did.

For Christo, though, it seems like she finally has embraced what will likely remain her most famous creation in her new memoir. I can only imagine what it must have been like seeing the thing become an Internet sensation, and then feeling ambivalent enough about being known for it that she hid her identity for so many years. I suppose I’ll have to read Under the Same Stars if I want to find out what she went through for myself.

This entry was posted in Books, News, Writing. Bookmark the permalink.