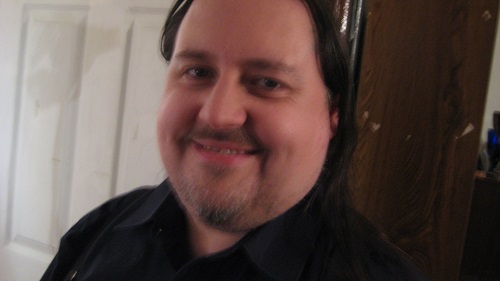 So a few years back, I was in a movie. It was a short film called Louis Schafer, and the filmmakers wanted somebody who actually practiced magick to play the title character – an evil wizard who basically goes around messing with people. It’s currently on YouTube and you can check it out here if you’re interested.

It was a lot of fun to do – though keep in mind I didn’t write the script and some of the stuff my character says about magick either isn’t true or doesn’t make a lot of sense.

Anyway, the film was up on YouTube for a little while, then was taken down, and went up again (I think) this last year. And the other day one of the filmmakers posted a whole bunch of stills from the film on Facebook. How this leads up to the latest site update is that several of those pictures of me were really good, and I decided to replace a couple of the pictures of me that I’ve been using for a while on this site.

I love the picture that accompanies this post, but unfortunately it’s a little blurry so it won’t work for publicity stuff. At some point I’m going to see if there’s any effective way to fix that, but I suspect if there is it’s beyond my skill as a graphic designer.

While we’re talking about photos, don’t get me started on the whole “authors need glamour shots to sell books” thing. It drives me nuts. I’m pretty ordinary-looking, so I won’t be passing for a fashion model any time soon – and I shouldn’t have to. Writing is basically the ultimate non-visual art form. How good I look doesn’t have anything to do with how good (or bad) my writing is.

It’s a little like whole clown sex stabbing thing. Whether or not you’re the victim of a bizarre, tabloid-worthy crime shouldn’t have anything to do with how good (or bad) your writing is either.

But I digress a little. The upshot is that I got ahold of some better photos and updated the site. I also decided to add a new About The Esotericist page that goes into more of my magical background than my “straight” About The Author biography does. That’s because people who buy occult books are a lot more interested in my magical experience and qualifications than my fiction fans generally are.

That’s something I find kind of weird, too. Back when I published my first fantasy novel, I thought that it would make a difference to people that I was a real magical practitioner. As it turns out it didn’t, and not just because I’m not the greatest marketer. Well-known magick author Donald Michael Kraig – his Modern Magick is one of the best-selling magick books of all time – tried it as well around the same time.

Now from the snippet I read I didn’t think his novel was all that good, but still. This was somebody with a huge media platform in the magick world, and his “magick novel by a real magician” didn’t do much better than mine. It’s currently at 5.5 million on that Amazon sales rankings, ahead of Arcana which is down at 7.5 million – but sales ranks below a couple million basically mean you’re selling a couple of copies a year.

So being an esotericist doesn’t really translate to extra notoriety as a fantasy author. At least, I don’t have any evidence supporting the idea that it does.

But anyway, back to the site. I also have gone through and taken out the Google+ social media links that no longer work and should have been removed when G+ closed, and added a Buy Now link to For The Chance of Union, which includes my Heptarchial evocation presentation that I gave at the National OTO convention a couple of years ago. The Buy Now link for Liber Spirituum has been updated with the URL for the paperback edition, since the limited edition hardcover sold out a while back.

In other news, work has been eating my brain lately and I’m behind on where I would like to be with writing projects. That’s one of the reasons this site hasn’t been updated recently. Hopefully things will ease up a bit and some point and I get back at it.

This entry was posted in Uncategorized. Bookmark the permalink.